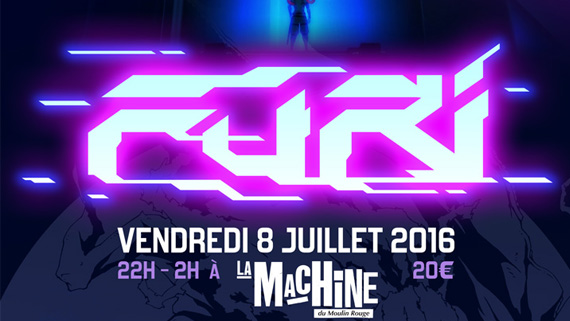 To celebrate the release of the game Furi, we’re organising a big concert in collaboration with The Game Bakers, the game developers.

Carpenter Brut, The Toxic Avenger, Waveshaper and Kn1ght, four of the artists who helped create the game soundtrack, will be on stage performing the original tracks from the game and their favourite tracks!

The event will kick off with a VIP evening event before the venue is open to the public, and arcade machines will be available prior to the concert to test the final version of Furi, with goodies for all!

An innovative concert combining electro music and video games, an explosive cocktail not to be missed!

The concert is on 8th July at La Machine du Moulin Rouge in Paris de 22h à 2h. To book your ticket and for more information, please visit furigame.com/event.

The Toxic Avenger is a DJ from Paris specialising in saturation, supercharged mashed basslines and caustic layers, a mix of tainted pop tunes all reheated in acid. He serves up an electro that is tense and dynamic, a dense and violent blend of raw energy and stunning melodies.

Carpenter Brut draws its influences from 80s TV shows and B-movies loaded  with synthesisers. The mysterious and discreet man behind the pentagon  evokes an encounter between Justice beats and the universe of John  Carpenter.

Kn1ght : Some supernatural music. You have to listen to understand. Turn up the volume, click play and close your eyes.