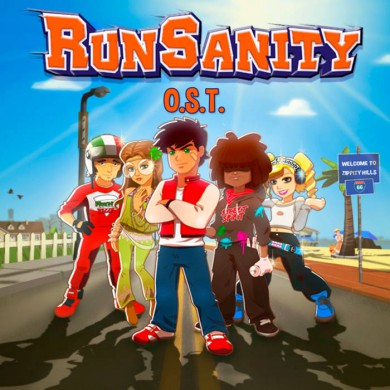 The soundtrack includes 12 tracks and has been available since December 12, 2012. Extra bonuses: Stan, Celeste, Zee, JM & Ollie ringtones (download only).

Enjoy the five musical universes of the main characters in this delirious and funny soundtrack!

Apart from:
– The Blue Danube, from “An der schönen blauen Donau”, op. 314 composed by Johann Strauss II.
– Stan Party Music, from “Dance in Underwear”, composed and performed by German Predator (with his kind permission).

Runsanity is a runner game developed by Heliceum on mobile (App Store and Google Play). In this arcade game you’ll have to run endlessly and cover the maximum distance while avoiding the obstacles in your path.