We’ve started shipping the Paper Beast records! To celebrate, check out the interview with Roly Porter and Mushin for UploadVR.

Initially scheduled for April this year, shipments of the Paper Beast records were delayed due to the global pandemic.

The wait was longer than expected, but we are finally pleased to have been able to ship the pre-orders for the Paper Beast records. From now on, new orders will be shipped weekly. It’ll just be a few more days before you can get those turntables fired up! We hope you’ll enjoy the music that Roly Porter and TsuShiMaMiRe have mixed up just for you.

As a reminder, the music from Paper Beast is available on music streaming platforms, as well as the vinyl and digital edition in our store and Bandcamp.

If listening to the music doesn’t completely satisfy your curiosity, and you want to find out more about the mysterious world of Paper Beast, you’ve come to the right place! On June 16th, Roly Porter did an interview with UploadVR, a media company that specializes in virtual reality. Together with sound designer Mushin, who helped the British musician to develop the soundtrack, Roly Porter explains how they brought the game’s musical universe to life using virtual reality.

Paper Beast is now available on Playstation VR and is due out this summer for PC (Steam, Oculus, Viveport). 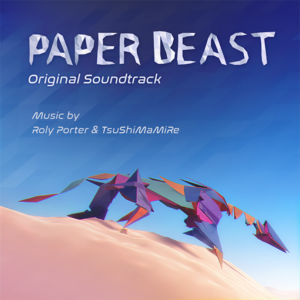